How to Talk About Ranked-Choice Voting

Ranked-Choice Voting is as easy as 1-2-3 and a straightforward way to improve our democracy. But mention it to a friend, coworker, or stranger on the sidewalk and you’ll likely be asked: “what’s ranked-choice voting?” Here’s a simple how-to on RCV education, including answers to common questions and helpful advice from VCNJ’s Live Outreach team, who have educated hundreds of people on RCV all over the state!

So… What IS Ranked-Choice Voting?

Of course, this will be the number one question people ask you! Take it from Live Outreach volunteer and frequent canvasser Chris Adair: “something like 50 percent of the people I’ve talked to have never even heard of it.” And even as a ranked-choice voting enthusiast, you might struggle to clearly articulate what RCV is and (most importantly) why we love it so much.

Here’s our in-a-nutshell intro to RCV: “Ranked-choice voting is a simple upgrade to the way we vote. Instead of being forced to pick just one person out of a field of candidates, voters can rank the candidates in order of preference. You can always vote for your favorite, and still express how much you support the others. Since RCV requires the winning candidate to win support from a majority of voters, it ensures that the people serving us in government really represent the interests of the majority of voters.”

If they’re not quite getting it from that explanation, a visual aid can make a big difference. Chris brings sample ballots (example below) with her to all Live Outreach events - “a total gamechanger” when it comes to simple, quick explanations on a street corner. 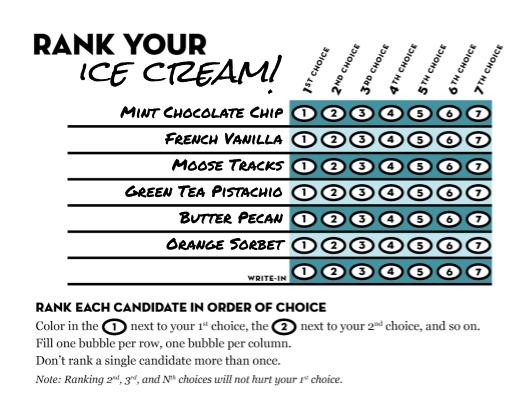 Comparing the ranked voting to everyday decisions we all make can also be helpful - in reality, we mentally rank our choices every time we buy groceries, pick a restaurant to order from, or decide what to watch during movie night with friends. In these examples, the ranking process is so quick and easy they might not even realize they’re doing it - and that’s exactly why RCV is a sensible, intuitive way to vote.

You can find reliable answers to most common questions on our FAQ page, but how you guide the conversation after your initial explanation depends on a few factors:

At its core, RCV is a simple, effective, and EXCITING way to improve our elections. Explaining that to others may take some practice, but it's rewarding and worthwhile. Whether you volunteer with Voter Choice NJ and talk to friendly strangers during a Day of Action, or simply broach the subject with your own family and friends, RCV education is the most important thing we can all do to build the movement. That’s organizing: first you talk to one person, then another… if we all do that, pretty soon we’ll have a winning movement to bring RCV to voters across New Jersey.